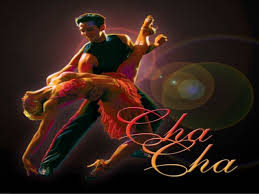 Hope you have had a fantastic start of 2019.

Next week we are starting our new term, the dance will be the Cha Cha Cha.

“…This is dance of three quick steps (Cha-Cha-Cha!) followed by two slower steps. With American Style Cha Cha averaging 30 beats per minute, and International Style averaging 32 beats per minute, this dance will definitely get your feet moving and your heart pumping! The steps are timed with the beats, and there’s a strong hip movement as the knee straightens on the half beats. It’s fun, it’s flirtatious and open to a range of personal interpretations.

The dance originated in Cuba and grew out of the Cuban Triple Mambo. An English dance teacher named Pierre Lavelle visited saw dancers this triple step, performed to slow rumba and mambo music, while visiting Cuba in the early 1950s. He took it back to Britain and taught it as a separate dance that eventually became what we know now as ballroom Cha Cha. It was introduced to the United States in 1954 and quickly became the latest craze, pushing the Mambo aside. It has never gone out of style and remains popular in nightclubs across the country, in part because it is so easy to learn.”

I will leave a video below with some basic steps :

If you want to learn this amazing dance, don’t hesitate and book your place in one of our Location.

Hope to see you all soon

Frederico & Nuno are top Latin and Ballroom dancers from Portugal. With over 15 years of teaching experience