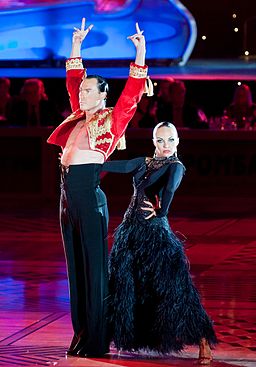 We are delighted to announce the start of Term4 of our dance Classes, in the next 4 weeks we will teach a latin Dance, the PasoDoble.

Below there is the History of this amazing dance.

“Who says the French can’t be Spanish? Witness the Paso Doble. Meaning double step in Spanish, this ballroom dance for couples is set to Spanish march music that is reminiscent of a bullfight in the heart of Spain.

It is the same style of music that is played when a bullfighter enters the ring to salute the audience before the fight, and again at the end of the fight, just before the kill. This assumes, of course, that the bull doesnt win the fight.

The dance is lively and dramatic, with long sweeping steps and aggressive movements. It is a dance of preparation for battle and triumph in combat, just like the bullfights that inspired it. The male represents the matador, boldly and proudly entering the ring. The female represents the matadors cape, which he whips around with graceful elegance. The female also takes on the role of the bull or an adoring senorita dancing Flamenco. The tempo is brisk and measured but not fast, being about one beat per second. What truly makes this dance is the energy one puts into it and the level of dancing skill.

The Paso Doble as we know it today was invented in Southern France, and Pierre Lavelle made it popular with the upper crust of Paris in the 1930s. The close proximity to Spain was undoubtedly its inspiration. Although the French copied the Spanish music and movements, they named the steps in French. The Sur Place and Huit, for example.

The dance is an elaborate pantomime of a bullfight, where the matador dances proudly around, confronts his enemy (the bull) and eventually emerges victorious. Movements by the male are proud and quick, in strong defiance, while the hand and arm gestures (particularly of the female) are often graceful and fluid.

This is not a dance for a crowded dance floor, as it necessarily takes up a lot of room. It is a dance to be watched and enjoyed, usually at exhibitions, performances or competitions. Youre not likely to find a knowledgeable partner standing by the wall at your local disco. It is a performance dance.

Experienced dancers find the Paso Doble challenging but extremely rewarding. Being theatrical in nature, it requires a great deal of showmanship, if not acting ability. Very similar to the Flamenco, it requires a haughty and confident attitude for the male.

The United States first began taking notice of the dance in the 1930s, however it has never really caught on in the English-speaking countries because it is not a dance you can do without a lot of experience. For this reason, it is a great opportunity for seasoned dancers to learn something novel that will be received well by audiences.

A dynamic dance that requires extensive professional training, the Paso Doble is not a dance for the uninitiated. If you are a strong performer, however, few dances are as impressive or stylistic. If the conqueror is in your blood, step up to the challenge. Ole! N’est-ce pas?”

Hope you have enjoyed and hope to see you in one of our Classes.

Frederico & Nuno are top Latin and Ballroom dancers from Portugal. With over 15 years of teaching experience